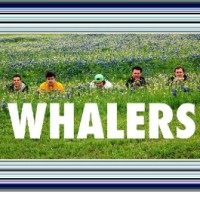 Fun indie pop rock that’ll put a perfect cap to your summer. Chumming Around by Whalers is a feel good summer pop rock album that’s definitely worth tripping to.

Although the production quality is not that good, you can instantly tell just by listening to one track that these guys definitely have a gem up their sleeves. Hopefully, they’ll take a cue and record a higher quality version and let us enjoy our last days of summer “chumming around.”

Chumming Around is a 6 track album released in June 2010 on Jamendo. Texas based indie pop rockers, Whalers, gather up some of their best all-fun-laze-around-all-day tracks and compiled it into this one record. The album explodes with uptempo summer beats that give a hint of what it must feel like to roll around in a poppy field, laughing all day, without worrying about bills, heartaches or life. Basically, it’s just carefree music meant to be enjoyed for what it is.

As mentioned, the production quality is a bit subpar. I can only imagine how the album must sound if it was recorded in high definition. I do like the vocals for some reason. I think it’s the slight resident drawl in there that works for me, (makes me think of Isaac Brock) although I’ll understand if you argue otherwise.

Some of the tracks worth listening to  includes, “Hyperion” which sounds like a more upbeat less 70s sounding Kings of Leon song. “Action Film” is also an instant classic.

Whalers is made up of Dan Martin – Guitars; Kyle Rother – Guitars; Amir Mozafari – Bass; A. Milos Bertram – drums; and Gus Smalley – Vocals. Chumming Around is released under a creative commons license.