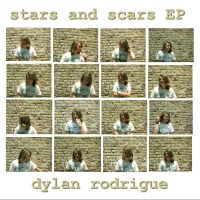 Known for his vocal work on indie rock trio, The Shreds, Dylan Rodrigue tries his hand on solo work. Stars and Scars EP is a 4 track compilation filled with the characteristic sweet voice of Rodgue, coupled with indie folk guitar work and a slight rockish feel.

The album showcases Rodigue’s capability as a solo artist and features tracks ranging from indie rock to moody, quiet folk music. Perfect music for an afternoon escape. Although his work for The Shreds is most notable, Rodrigue also moonlights for other acts, namely, Of Wheel and Water and Seamsplit.  At the same time, he has several solo projects under his belt including this EP.

Stars and Scars EP opens up with Come Through, a simple, folk guitar inspired work definitely relaxes as much as it impresses.  One thing that stands out with Rodrigue’s work is that even though his melodies are simple, they stay stuck to your head after a listen or two.  On the other hand, title track, Stars and Scars also bears the hypnotic, blissful feel found in the other tracks.

Rodrigue’s simple tracks and great vocal work help to make this album worth listening to.