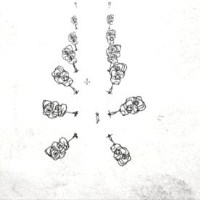 For those of you who love Lovecraft, maybe the total randomness and weirdness of his ideas, then you might enjoy this Lovecraft Game. Before delving any further, let me just tell you that this game is basically unfinished. It’s pretty much playable but the ending is a bit abrupt.

However, like any game expected from Cactus, you get a great game with cool graphics; definitely enough to tune into this game even for a bit.

Lovecraft Game  was initially developed by Cactus as a game for a TIG Source contest. The game is essentially a shooter game that features hand drawn graphics that’s reminiscent of stone age animation (if they actually had animation skills at that time.) As the lead character, you travel across a vast land filled with strange and dangerous creatures. It’s your job to get rid of them and explore the land surrounding you.

Controls are typical, with WASD for the usual movements; the mouse works for pointing and aiming at enemies. For getting rid of the “bad guys,” you have several items under your arsenal including a machine gun as well as a shotgun. Talking to non-violent characters is possible and plenty of Lovecraft’s ideas are embedded in the game. Of course, the game ends once you have exhausted every nook and cranny of the game or unless you die.

Overall, the game is worth checking out. It won’t take long anyway and if you can appreciate the “primitive style” graphics, you might even enjoy it.