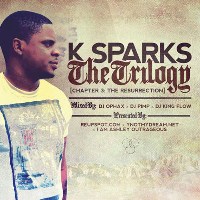 New York based rapper, K. Sparks, hits up the airwaves again by putting a final cap to his Trilogy series. This latest release is entitled Chapter 3: The Resurrection. This new effort comes doused with 19 hot tracks that are true to K. Sparks fashion. It’s filled with catchy beats, great skills and an awesome vibe to it.

Like his previous releases, Chapter 1 and Chapter 2, this compilation also sees several talented artists and producers contributing their skills. Artists and musicians like Wordsmith, Laëtitia Dana, Jeff Chery, and Ahmad , to name a few, pitch in their talents to complete this record.

If you love the sound of K. Sparks and have followed this awesome series, then you definitely shouldn’t miss this one. He pulls out all the stops and hands out great tracks one after the other.

Even though he managed to put out a great compilation yet again, there are a bunch of standout tracks on this one.  Most of which were of course, initially leaked to give listeners a taste of what to expect in the album. Black Magic produced by D Roof is a track that contains a smooth jazzy vibe that features West Coast Veteran, Ahmad, manning the vocal work. He beautifully sings with a soulful voice that creates a cool, breezy flava.

Another great cut to watch out for is Velvet Thoughts (Supthin). It’s no surprise that this single was the fourth track leaked for the album. Showcasing the beautiful and melodic vocals of Laëtitia Dana in addition to Sparks’ spot-on skills; it’s a track that truly represents what you can expect from this record. Meanwhile, Bounce is also one cut to check out. In fact, this was one of the first leaks from Chapter 3. As expected, it features the awesome mic skills of Sparks showing why he’s one of the most loved indie emcees around. This is straight up hip hop right here. Great beats, tons of skills, creative melodies and purely in your face.

K. Sparks is not only a talented emcee but he also produces and writes tracks for other artists. Most of his albums are released and available for download online under a creative commons license. Definitely one hip hop artist that’s worth checking out.