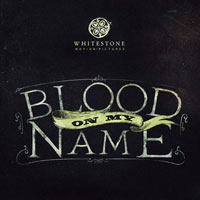 I have written about work of the team from the Whitestone Motion Pictures before, and I am pretty sure I will write about them again… and again. The reason? They create some of the most outstanding and visually stimulating short films I have seen coming from boutique film company. Their latest creation, Blood On My Name, is a masterfully crafted dramatic western, centered on the theme of forgiveness and redemption, with just a touch of singing that will surely generate some unexpected goosebumps.

As described by Whitestone, Blood On My Name is a short film musical narrative in the style of Americana folklore. The story focuses on two main characters (starring Justin Welborn and Sean Bridgers) fleeing after a botched robbery. After a long run and as the wound of one of the men becomes to much to handle, the two stop in the mountainous forest. It is there that Erwin (Justin Welborn), who experienced a change of heart, recollects and wants to take advantage of a deal he has made for himself and his friend Thomas (Sean Bridgers); a deal that could save both of their lives. “Instead he calls down the agents of a malevolent supernatural force who will hunt him to the ends of the earth rather than see him escape.”

Written and directed by Brandon McCormick, Blood On My Name is definitely a film worth your time. It’s not only beautifully shot and edited but includes some of the best acting, full of more than powerful expressions and real emotions, that I have seen in McCormick pictures up to date. Moreover, those of you who have seen any of the Whitestone’s other productions will not be surprised by the equally amazing sound effects and choice of music especially prominent in the second part of the short – so be sure to keep watching until the very end.

Whitestone Motion Pictures has also provided some extra material to accompany the short. So make sure to head on to their website to watch the behind the scenes footage and to download the soundtrack.

With all the great work already in their portfolio I hope that one of these days I will also have a pleasure of seeing Whitestone Motion Pictures and their full length feature film on the big screen.