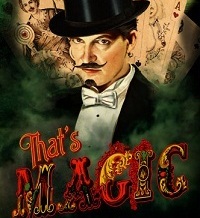 This 14-minute musical revolves around a disenchanted magician who comes face to face with his own self doubt about magic in the world. A mysterious woman enters revealing the true meaning of magic, far from what the magician had originally conceived.

This musical offers an antidote to its garish mainstream counterparts. The story is cleverly penned, it’s concise but still captures the soul message of the short–that there’s magic around us.

One thing that helped this film to standout is the superior lighting. It was a significant player to the short because it gave the an ambience of surrealism and magic. It showed the audience that the story digs deeper from real events. The transition of dark to well-lit scenes clearly represents the magician’s progress to enlightenment.

The performances of the magician (Jackson Walker) and the mysterious woman (Sorrel Sanders) were equally off the hook. They have perfectly portrayed the emotions written in the songs which are rich and unforgettable.

What director Brandon McCormick, composer Nicholas Kirk and their colleagues have done is to entrance us with a richly acted, aesthetically lovely story creating a world where you’ll find magic from the simplest of things.

That’s Magic! soundtrack is also available as free download in both iTunes and 200megs version.