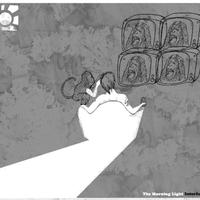 Interface is the second EP from Italian crew, The Morning Light Project. The album is a great mix of retro 80s synth rock that bring to mind artists like, The Pet Shop Boys and Duran Duran. The band first formed back in 2008 and since then have churned out several releases through their Jamendo and BandCamp pages.

Made up of Francesco Algeri, Angelo Cincotta and Augusto Ielo, the trio weave together a mix of danceable electronic ambient beats that became their ticket for gaining followers when they first started out. Their sound is charming and there’s a lovely retro feel to it that makes you think of the good old heydays of 80s synth rock.

The band’s first EP was a self-titled release back in 2009. It was self-produced and released by the band members themselves. By September, the group licensed the record under Creative Commons and released it as a free download over at Jamendo. This garnered plenty of favorable responses from international fans and helped the album gain a spot in the top downloads section of the site.

For this second EP, Interface, the band takes the same route by offering the EP as a free download. Music wise, their sets are tighter this time around but they still have that catchy retro sound that made them a hit with fans in the first place.

Two of my favorite cuts on the record include Slicer and The Shark and The Puppets. They make you want to grab some random dance partner and start groovin’ on the dancefloor. The songs are a mash-up of electronic synth sounds and head bobbing beats, sprinkled with occasional vocals.

Interface is a record that’s definitely showing a more polished group. The beat and the sound are more consistent and certainly enjoyable. Give it a download and while you’re at it, check out their previous EP as well.