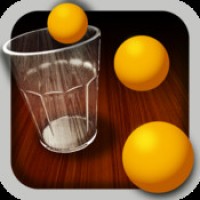 Yet another fun, casual, time-killer game hits the iOS platform and this one is called, Glass Pong. The game is very basic and there is nothing hardcore about it; there are no gimmicks, only visually appealing graphics, tough gameplay, zombies, adrenaline pumping speed and the works.

Developed by Sigma Communications, a Japan based company, Glass Pong is a quintessential animated game with a typical Japanese touch, noticed especially in gameplay, sounds, music and environments.

The objective of the game is very simple, pop-in as many ping-pong balls possible into the glass before the timer gets killed at 60secs. Wow, no rocket-science here. What really works great is how well the game utilizes the accelerometer and with the accuracy needed in holding the onscreen pong ball, tilting the device, and letting go off the ping-pong ball really adds to the whole realism.

Rules are straight forward, aim and throw the ball in the glass. Every orange ball pocketed multiplies the player score by 5, if a pong is pocketed during the buzzer-beater (last second), then the player achieves 10 times the score. Additionally, consecutive pocketing of the pong balls also yields double scores upto five times.

Gameplay is also simple. Players need to hold the displayed pong on the screen, and while doing so, need to tilt the device in the direction the ball needs to travel. Once that is done, the player needs to shake the iPhone vertically and release their finger to throw the ball. Quite an interesting method of playing, but it surely demands its own fare share of accuracy and learning.

The current update of the game is version 1.4 and it adds a new stage, Buzzer beater and Facebook support. Players can ost their scores directly via Facebook and Twitter for instant sharing and matching of scores. The game is fully integrated with Game Center and helps in earning players some “Bragging Rights”.

This game is a great way to kill time and also will be loved by casual gamers. The right mix of intuitiveness, motion-control, and toned-down graphics make this game a must-have on every arcade gaming lovers iOS device. Being a free version, this app is heavily ad dependent, to eliminate in-game adverts, players can purchase Ad Free version for $0.99.