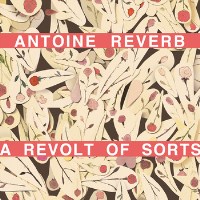 Antoine Reverb: A Revolt of Sorts

If you ever want a record to keep you company while you’re down in the low, then A Revolt of Sorts might just be your compilation. It’s not so much that it will lift your spirits or maybe depress you even more, but it’s more like a quiet companion that patiently waits for you to get over whatever it is you’re morosing about. The songs they play are a mix of eclectic sounds that sort of float around you.

Antoine Reverb is a five-piece crew from Guadalajara, Mexico. The band plays folk rock with a psychedelic and shoegaze touch. Although the band is still relatively unknown, their music has been slowly making the rounds. In fact, they’re slated to play at SXSW 2012.

The boys behind the band include Andy (voice, acoustic guitar), Benjamin (synths, voice), Cynthia (organ, voice), Diego (electric guitar), Miguel (percussion), all of whom kickstart the compilation with the trippy, shoegaze number, Lontano. You’d be forgiven to think that the band is an ambient techno group because of this since the song is purely instrumental and consists of lush sounds you would expect from the genre. Meanwhile, Little Cabins/Little Castanets, introduces vocals along with a shoegaze elements. The song is both epic and subdued, with swells just in the right places. It almost conjures up a trance-like state even. One of my favorite tracks in the record.

Other tracks in the compilation include the melodramatic psychedelic song, Flower Blues 2; the cool, laid-back beat of Lucy (Los Amparito Remix,) the electronica infused, Jenny Drives a Standard  and the slightly acoustic, quirky track, A Series of Weddings.

A Revolt of Sorts is certainly an album that’s worth grabbing. It’s not hard to imagine these guys playing the stages of SXSW, they have that indie shoegaze rock allure that’s hard to turn away from. Grab the download, it’s available for free.