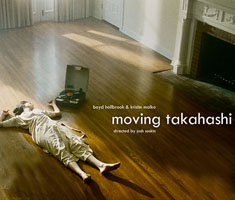 Cuddle up with a loved one while watching Moving Takahashi, a pleasant addition to the “bad boy” romance genre.

This Kickstarter-funded short film is by the LA-based writer/director Josh Soskin. It stars the model-turned-actor Boyd Holdbrook and the innocent-looking Kristin Malco.

The film talks about a young hustler/mover (Holdbrook) who stumbles upon a suicidal daughter (Malco) while moving furniture out of a posh LA home. The mover’s original plan of robbery changed in a rare fit of conscience to help the dying girl.

Shot on 35mm film by the 25 New Faces of Independent Film ‘s Rob Hauer, the short’s overall aesthetic is undeniably tasteful. Hues of yellow and subtle lighting evokes a soft and romantic feel throughout.

The story, written by Soskin and Patrick James, were bold and romantic. I liked how the writers showed that sometimes less words and one expression can say a thousand emotions. The lines were short and provocative producing more tension between the two leads.

Holdbrook showcased an impressive performance. He was the key-player to prove the film’s bad boy genre. Malco, on the other hand, fashions the suicidal daughter perfectly. Her presence in each scene were captivating and dreamy.

All in all, Moving Takahashi showcases the crash between two lost souls finding their way in each other. It’s that kind of film that will haunt you for months with its fleeting examination on love and guilt.