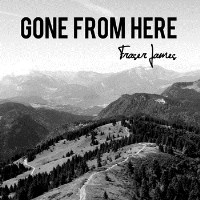 Creating beautiful acoustic indie pop, Fraser James, has a knack for capturing any listener’s attention with only his guitar and sweet vocal chops.

Gone From Here is a debut EP from the St. Albans singer. It delivers music that seems ideal company for cold afternoons with hot cocoa on hand while silently taking in the quiet day.

You’ll find 8-tracks in this compilation, all recorded between winter of 2010 to summer of 2011. Almost all of them were written by James except for Flume which is a Bon Iver cover.

Although there are upbeat singles, most of the tracks on here have a subdued folkish mood. Starting with Scattered, the song introduces listeners to James’ endearing vocals and lyrical honesty. It features steady guitar strumming combined with intimate lyrics and topped with harmonic backing vocals.

The artist not only showcases his penchant for catchy, uptempo indie tracks but he also dabbles with quieter singles like Gone From Here. Meanwhile, pure indie pop gems such as Forever for the Second Time and Blue Eyes are also must listen cuts.

Fraser James definitely brings his A-game to the table with this compilation. It has a smooth, laid back feel that’s instantly likable. Plus, each track beams with a pleasant and catchy melody enough to warrant a listen.

Currently, James is concentrating on writing his solo material but he also does guitars and vocals for his band, Baxter Wilson.