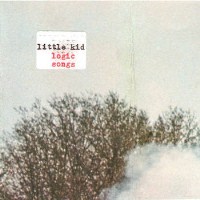 Logic Songs seems made for times in your life when you’re feeling a little reflective; moments when you’d rather watch the morning sun or enjoy some quiet time for yourself.

Little Kid is actually the moniker for Ontario-based musician, Kenny Boothby. He has released several records and demos under this name; defining his sound by incorporating subdued guitars, lo-fi recording as well as dreamy melodies.

Apart from releasing the record for free digitally, there were also limited edition cassette tapes sold by the artist. Covers for both editions were handcrafted from two old books he found at the Salvation Army.

Mellow and sentimental; two words that seem to be attached to most of Little Kid’s songs. This stripped down indie folk artist sings about anything from God to trains. In a weary, reflective tone, you’d hear his endearing voice lamenting about life in, The Train Behind My House.  He follows it up with a slightly more upbeat, You Might Not Be Right. The song is raw with bedroom acoustics at its finest but there’s something enjoyable about the song. It’s catchy and the background white noise adds a certain beauty you’d have a hard time appreciating on any other song.

Meanwhile, title track, Logic Songs/We Waited…, offers the same charisma you’ll find in the previous tracks. The artists’ voice adds sincerity and a depth to his lyrics, making you want to listen and understand what he has to say. He finishes the album in the same vein he started, by singing about trains with his guitar and tender voice.

Logic Songs is simple and often better suited for listeners who are appreciative of lo-fi indie folk music than for those who expect a clean, mainstream blend of indie folk. It’s a modest but heartfelt record that you can put on for times when you just want quiet company to make your day extra special. Grab the album and take a listen.