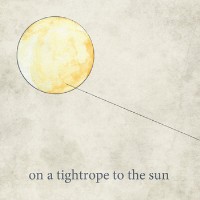 Jacob Montague: On a Tightrope to the Sun

On a Tightrope to the Sun is a collection of tracks by singer/songwriter Jacob Montague. The album contains mostly new originals from the singer and one track from his previous record, Fly On.

Known for his spontaneous approach when it comes to recording and creating his sound; the album captures the quiet beauty of instruments while encapsulating beautiful melodies that’s present in Jacob’s sound.

Like his previous album, this one is offered at a name-your-price option over at his BandCamp page.

Composed of 15 tracks, the record opens with twinkly keyboards and soaring synths; London is a track that conjures images of the movie-myth frame of the rainy and romantic city. Slightly uptempo and filled with bright beats, the song opens the record in a nice way. All of the songs on here are instrumental but Jacob’s capacity to mesmerize with his arrangements and use of instruments are shown in full force. Cuts like London Acoustic, Cinema, Once Youth and This Sea of Sound are among my favorite ensembles in the record.

Overall, the album fares well as a cleanser of the palate. The songs are clear and communicate a pureness that’s fit for relaxing when you’ve had a stressful day. Go take a listen and grab the download.