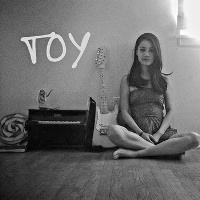 Currently based in L.A., the Hawaiian singer-songwriter enthralls her listeners with a one-of-a-kind pop experience—an intricate mix of catchy hooks and heartfelt lyricism.

With over 200 shows, Kawehi has already made a name for herself. She has been featured in Music Connection’s Magazine’s “Hot 100 Unsigned Artists & Bands”, CBS News Most Viral Videos, Vimeo, Booooooom!, and Sony Music.

Released last May 7, 2013, TOY is an EP where every song has a toy instrument of some kind. Manned with ukulele and guitar platypus, the album opens up with On The Radio (explicit). This three-minute track has that upbeat, funky sensibility for the pop enthusiasts.

Painting a stark contrast with the previous track, Henrietta sheds a bit of pop rock with a steady beat in the chorus. I Can’t Move wraps up the album with mystical keys and soothing vocals.

All in all, TOY is a fun, experimental album that suits the palette of almost everyone. The four tracks in this EP has proven that Kawehi deserves the attention that she’s getting from fans and the industry.