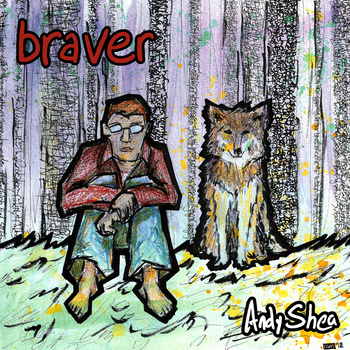 Braver is Andy Shea’s latest short compilation. An artist that believes music is best shared and enjoyed with friends; the album is a 4-track collection that showcases simple yet endearing indie acoustic folk.

Described as a fan of the “NBA and Shakespeare,” Shea is a talented singer songwriter that’s currently based in New England.

He admits to being influenced by fellow musicians and talented songwriters, Rivers Cuomo and Elliot Smith among others.

As short as this EP is, there’s something quite beautiful about it. Braver is a set of electro acoustic tracks that are wrapped around Andy’s slightly deep, in instances, detached vocals.

The EP starts with the slow and quiet single, Trees. If you listen closely, yes, it seems the singer is singing it from the humble tree’s perspective. The song is short but it’s enough to make its mark. In contrast, title track, Braver is slightly more upbeat. Featuring guitar strumming and poetic lyrics, the song transforms the mood for the compilation; lifting it into a happier phase.

Meanwhile, The Wolf in the Woods, steps back into slow folk territory. A simple but heartfelt cut accompanied by expert guitar picking and vocal work that’s more expressive. The record is finished off with the longest cut titled, Time Has Said It All.

Braver is an EP that’s minimal at best. There are some uptempo moments but it’s generally a stripped down affair that showcases good vocal work from the singer. They’re not the type of songs that stick to you after one listen but instead they long to create a relationship; slowly wooing you into getting to know them better over time. Great stuff if you need some company during quiet and moody afternoons.