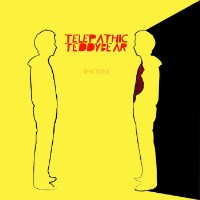 Reactions is one of those records you can put on in a cool house party and leave it playing for a good long time. It’s filled with both fun and energetic dance beats as well as quiet electronic pop songs.

Telepathic Teddy Bear is actually the pet project of Juan Carlos Padilla; a Mexican singer-songwriter from Monterrey, Nuevo León but currently based in Boston. The artist has been active in the local Monterrey music scene for some time but it wasn’t until late 2010 where he finally managed to release his first EP under the moniker.

Reactions is his first full length album. It’s a wonderful mix of pop, electronica and indiepop meant for casual listening.

Ever since Reactions was released, it’s garnered a heavy positive response from internet music lovers everywhere. This comes as no surprise once you listen to the record. Filled with textures, synths, glowing lo-fi sound along with hints of 80s style new wave and even piano filled soft pop songs; the album is catchy without even trying. It’s not just the artist’s melodies and beats that make the record fun to listen to. The quality of the recording and mixing is top notch as well, making it hard to believe that the album isn’t topping the pop charts somewhere.

Right from the getgo, the album already impresses you with Leave It All. I’m not gonna lie, the first time I listened to it, I initially thought it was too “Cobra Starship” yet after two replays, it’s officially stuck and has become one of my favorite tracks in the record. The synths, soft electronic hints and the low key vocals are perfect for injecting some fun into a lifeless party.

Certain tracks like My Body’s a Question, This Is Love, and Every Time The Son Leaves obviously dabble with a more mellow electronic folk pop feel. Each of the tracks showcase the artists more quiet and reflective side. It also provides a nice and surprising balance to the rest of the cuts on the record.

The album is definitely a gem. If you’re not into electronic indie pop then this might take a few listens (the most two) before the songs stay stuck and becomes a staple on your playlist.