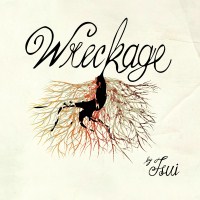 This cool indie pop affair is Tsui’s second compilation after the endearing Half Man Army was released back in 2007. This record is available in both physical CD formats and free download on the group’s main website.

It features 8 tracks that showcases beautiful indie pop with hints of acoustic guitars and melodic sequences. Formerly a member of indie folk group, Jr. Corduroy; Mark Kraus began to create music on his own. Writing and recording in bedrooms and various recording studios here and there. He creates pleasantly melodic cuts that are filled with catchy hooks and heartfelt lyrics.

Even though it’s filled with simple songs, the album is easy to listen to and love. The compilation opens up with Black and Listen. This semi upbeat track reminds me of a happy Radiohead. This isn’t surprising since the group admits to being influenced by the English alternative group. They also admit adoring the music of Wilco, Elliot Smith and Neil Young among others.

On the other hand, Gravity features mellow music and acoustic guitar work combined with soothing vocals. Coming For You opens with haunting instrumental with twinkling piano and Thom Yorke-sounding vocals. Beautiful, reflective and haunting, this is one of the more standout tracks in the album. So It Goes On, meanwhile, is a typical acoustic indie pop cut that wraps up the entire compilation perfectly.

Although to date, it seems the group is no longer together, it is good to see that they left this little gem behind. Tsui is made up of Mark Kraus, Jeremy Thompson, Jen Chouinard, and Arto Payaslian.