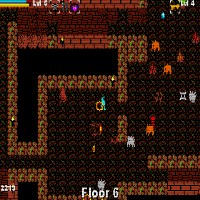 Described as an “co-op action roguelike” game, Shoot First, is a  mix of Roguelike elements, retro graphics and RPG systems. As weird as this combination may sound, it’s actually works great.  Of course, instead of the typical sword and shield in RPG systems, you will be packing an automatic instead.

Developed by Teknopants, the game allows you to play single or cooperative missions. Go on two player mode and fight off monsters, quests, score some loot and save a couple of trapped people in the process. This game certainly knows how to fuse weird elements together and make it work.

If you play the game, expect a lot of dungeon crawling and monster killing goodness coming your way.

Armed with randomly generated dungeons, playing the game becomes always fresh and exciting. Controls for the game are simple but very responsive. Essentially, you can shoot, use, or pick up a weapon. At any one time, you can only carry one weapon though. However, you can pick up three more items as you go ahead on your quest. Controls can also be customized for your convenience. This is perfect especially if you are playing with another player.

Just like an RPG, whenever you kill off an enemy you earn points. These points are perfect for level ups. Once you do level up, your weapons upgrade as well. The only thing is the upgrade doesn’t transfer whenever you change weapons.

Gameplay depends on the players. You can either go your own way and explore every nook and cranny of the dungeon while taking out the resident monsters. Or you can simply look for the nearest stairs and head for the exit, so you can advance to the next level. There will be bosses popping out from nowhere so you always need to be on your toes.

Overall, the game definitely has more good points than bad points in my book. It has a fun gameplay that’s fresh and quite intriguing. The weird mash-up of different game elements work great. Plus, it features a nice and catchy soundtrack. Give it a go.