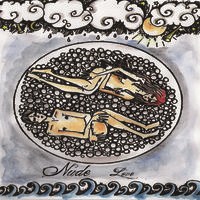 Nude is a progressive rock band that’s not ashamed to play with their tempo, instruments, vocals and mood. Working together for less than a decade, the group is made up of four musicians who are heavily influenced by such prominent alternative, indie and progressive rock bands like  Sonic Youth, Radiohead and Genesis.

These four Frenchmen create a mix of moody prog and alternative rock with an overall moody and pensive vibe.

This one is certainly worth a listen especially if you adore Tool and the other bands mentioned above.

Love is the group’s debut album. They first released EPs back in 2003 and 2005 but finally climbed their way to releasing a full debut in 2008.

Although this album is three years old, it’s still intriguing and definitely worth checking out. It opens with the 16 (!) minute long track, Gender Hacking. If you love progressive rock, you can tell from the onset that this one will be a real treat. You don’t get any vocals until about the 5 minute mark and leading up to that is a beautiful mix of bass, synth, guitars and moody beats. Vocal work is similar to Maynard James Keenan which already wins props in my book. Even though this one is a bit long, it definitely sets the stage really well for the entire album.

Other songs that are worth checking out include La Puerta, which mixes a lovely Latin vibe to the cut. It’s also sung in Spanish, which adds to the psychedelic rock feel of the song. Meanwhile, Pi, is also another awesome cut. It runs for about 11 minutes and true to form for Nude; the song mixes instrumentals with subdued vocal work.

Although there’s a danger from the group sounding as if they are trying too hard to achieve a Tool or Muse-like sound; there are several tracks in the record that will certainly make true blue “progists” smile.

This work is licensed under a Creative Commons Attribution-NonCommercial-ShareAlike 2.0 France License.