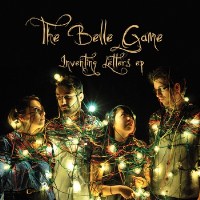 Making a name for themselves in the indie folk pop world, The Belle Game’s music is tough to resist. In fact, their sound resonates with a familiarity, much like getting that comforting hug from an old friend.

This Canadian crew have known each other for a long time. In fact, two of the members have been friends since they were 5 years old. With fate & circumstances guiding them to each other, the crew officially formed and created their first debut EP, Inventing Letters.

This mini EP is about two years old but time hasn’t diminished the band’s capacity to enthrall its audience thanks to the lovely melodies and catchy laid-back beat they create.

Inventing Letters EP only comes with 4 tracks but these same songs are more than enough to convince listeners and potential fans to keep coming back for more. The compilation was released as a digital album and a few hard copies were produced. Thanks to a radio contest, the band got to perform in different cities, helping spread their music. Ultimately they won the “Fan Favorite Award” in the contest which led to their single, Tiny Fires, gaining heavy rotation in their local stations.

Most of the tracks in the EP are accompanied with lovely harmonies and melodic singing. Opening with Shoulders & Turns, the group fuses acoustic guitars and a catchy, relaxing indie folk beat to create a stunning song. Cocaine Starry Eyes, meanwhile, features male vocals this time but it still has that twinkly, endearing feel listeners will come to associate with the band.

Title track, Inventing Letters (The Suitcase Song), is a pretty song that has everything the band stands for; particularly beautiful vocal work, a relaxing rhythm and simple feel-good ambiance.

If you enjoy indie folk pop, then you really shouldn’t miss out on a chance to add another great band to your playlist. This one is a keeper and their more recent releases and continuing success is proving that. You can grab the download over at BandCamp. It’ll be worth your time.