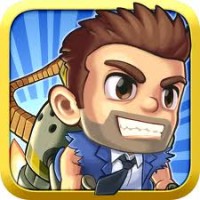 If you loved and adored the Fruit Ninja saga, then the same developers have got a fully loaded fun game back to iOS, just for you. Jetpack Joyride is the offering that will keep players hooked to their device for hours at a time.

Created by Halfbrick, the game will surely be riding on the success of the Fruit Ninja frenzy. But as the developers has received a very positive response for Jetpack Joyride when it comes to the seamless gameplay that has been so well integrated within the app, you will not leave disappointed.

The game puts the player in the role of Barry Steakfries, with a multitude of choices of truly amazing jetpacks. In the game, players break into a laboratory and keep collecting coins on their way. Well, it is not that simple thou. In addition to collecting those golden goodies you will also need to dodge various types of electric charged obstacles, laser beams, and rockets. Yes, you have to dodge all of them to enjoy the game.
Jetpack Joyride also features Spin Tokens that grant players a chance to try their luck at the spin machine, gifting players a second chance in game, 500 coins, 100 coins and many more.

There is no boss level here nor do players need to fight a monster at the end to win. It is like a never ending game with multiple levels. As the player progresses, the speed of the game keeps increasing which takes the difficulty level a notch higher. The main attraction of the game definitely are the awesome special jetpacks that the player gets in the form of bonuses in the game. So, there is a money spinning bird jetpack, dragon jetpack, bad hog (bike) jetpack, crazy freaking teleporter and many more to collect.

The game is really fun to play and the surroundings prevent it from becoming repetitive. Jetpack Joyride has is integrated with iOS Game Center and also has the ability to share scores and screenshots on Facebook and Twitter. Also, for the more competitive at heart, Jetpack Joyride features many achievements that need to be accomplished as the game goes by. Overall, a perfect offering living up to the Fruit Ninja saga. A 5 out of 5 well deserved.