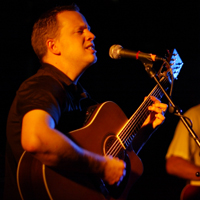 I greatly admire artists whose passion and personality is strongly reflected in their final craft. I also have a great respect for those who write, compose, record, and produce their music all without the backing of a label and still come out with an album that could make many other musicians jealous. Derek Clegg, a one man band, appeared twice on our blog last year, once with a release of KJC and than with Here Comes Your Fate, Quick Duck. Today he is back with yet another Creative Commons licensed Indie/folk/pop album, Beautiful World, filled with great lyrics and laid back yet diverse sounds that will surely place some of the songs into your ‘favorites’ playlist – for me this included Innocent, a beautiful track that hopefully will find its way up.

Beautiful World opens the album with cheerful and optimistic lyrics and music drawing its inspiration from the genres such as folk (with just a touch of country). However, as the best feature of the album is its versatility – keep listening as each song comes with its own story and emotion; like Innocent with a more modern indie-pop feel, and rock sounds of Lights Out (definitely worth a listen), great piano entrance found in Better Friends, electronic influence in I Have Found It, and the beautiful acoustics of Butterfly.

Born in Michigan and currently residing in Chicago, IL, Derek Clegg is a one man band, writing, creating (with an occasional help of other talented musicians), producing and crafting his music from the bottom up in his own personal home studio; music that have been compared throughout the blogosphere to artists such as Wilco, David Gray, and Damien Rice. All in all it is really great to see so much effort put into creating a quality free album by a solo artist.