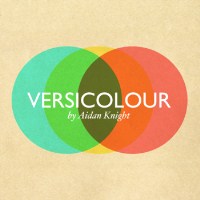 Aidan Knight’s music is like listening to a mash-up of Coldplay and Damien Rice. For a long while, the singer/songwriter has been contributing his skills to various bands, playing anything from bass to hardcore drums.

For Versicolour though, he showcases a more laid-back acoustic indie folk side that is both soothing and melancholic. Accompanied by soft guitars and an equally emotional voice, the tracks are perfect for lazy afternoons, heartbreaks or just quiet moments where you feel like reminiscing about the many things in your life.

Opening with subtle pianos and an endearing voice, Versicolour welcomes listeners with, The Sun. The five-minute single is filled with dreamy strings and great vocals. It’s followed by a sweet and catchy indie love song titled, Fighting Against Your Lungs while third track, Eyelid Clicks, is a beautiful and mellow piano ensemble. A few other must-listens include Jasper and Sorrows. Most of the other songs resonate with an emotional and soothing touch, yet always hovering on the realm of soft indie folk.

Playing most of the instruments himself, Knight collaborated with the band The O’Darling to fill in the missing harmonies, drums, strings and horns; allowing Versicolour to become the lush album that it is. Filled with moody, folk music, it’s a great piece that showcases the artists’ versatility and capacity to enchant audiences.

With music running in his veins, Knight performed his first show while he was 16 with his mom opening for him. He’s been a member of several bands including Counting Heartbeats and Maurice.

Apart from being a singer/songwriter, he also co-founded the local label, Adventure Boys Club (with Tyler Bancroft) and self-released this album under the label. The record is offered at a pay-what-you-want option over at BandCamp. You can also support the artist by grabbing his other EP, Friendly Fires, after you’ve thoroughly enjoyed this one.