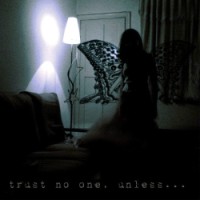 Expressive progressive rock that lulls you to 80s dreamland. Okay, if you are like me and you speak nada French, then you might have trouble looking for and understanding information about this band.

One thing is for sure though, Trustno1 makes bands like The Cure proud. Unless…is the groups 31st album release in Jamendo. It comes equipped with seven 80s inspired pop rock which extends to progressive mode once in awhile. It may not be the best there is on the genre, but it’s certainly worth a listen.

Trustno1’s album is certainly an odd mixture of 80s pop rock and progressive music that brings to mind The Cure, New Order, The Smiths and a tad bit of the Smashing Pumpkins. This offbeat sound creates beautiful layers track after track. Although it’s hard to be completely impressed with the vocal work on some of the songs, it nevertheless works well.

Some of the more intriguing cuts from Unless… includes Six Miles Under which is an instrumental track that is filled with beautiful and melodic guitar work. It has a quiet but haunting feel to it, similar to that of walking inside a very long tunnel that’s filled with odd and colorful objects. Although the song extends for about 20 minutes, it never gets tiring.

On the other hand, Deja Entendu is a great opening track that sets the best feel for the album. It’s not too complicated yet not too simplistic as well. This great balance between two different genres, 80s pop/goth rock to progressive, makes the album easy to listen to and actually likable.